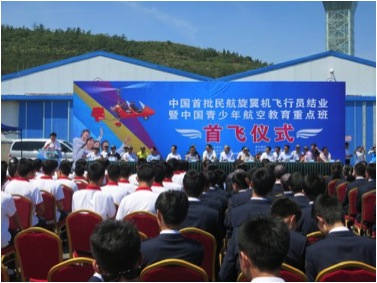 June 28, China's first Gyroplane pilots Graduation Ceremony of General Aviation was held in Laiwu Aviation Park. It was a beautiful sunny day. The new pilots have made impressing flight demonstrations with the gyroplanes MTOsport, which was made in Germany. Among the honored guests are the Deputy Commander of the Air Force Mr. Yuan, Members of Political Consultative Conference, … and other leaders. This Gyroplane Pilot Training in Laiwu is country's first Gyroplane license exam course, which is approved by the CAAC and State General Administration of Sports. In the future, the flight enthusiasts can get legal LSA Flight Training hear and fulfill their flying dream.